Viola needed that beach and that sea to bring her last mission of love to an end. She asked for keys to a suite with a shower and a gazebo as close as possible to the seashore. She put on her bathing suit, left all her belongings except for the book she was reading, and went to bathe in the sun. On the one side, the Apuan Alps coloured the sky with their proud and ancient beauty, and on the other side, the African disa grass-covered gazeboes decorated the sparkling sea of Versilia. And to top everything off, a button right by her side that she could push whenever she needed some care.

Lucio also needed that same place to satisfy his deep need for love. Upon hearing the bell ring, he informed the staff that he would take the orders from the people on the beach. He loved being in contact with clients; it made him feel like he played a role in their wellbeing.

Viola saw him coming and was surprised, she had never seen him here, until then. “Hello, how can I serve you?”
“I would like some of that carcadè, the hibiscus drink that the owner always prepares. By the way, do you know where she is? I would like to say hi to her. She and her husband are usually the first people who greet me when I arrive.”
Lucio smiled at her.
“Is this your first time here this year?”
“Yes, unfortunately. I have been very busy.”
“This season, I have been given the honor to manage Malù. They went away for a few months.”
“So, where did they go?”
“Nobody knows. They said they were off to discover a new secret place to celebrate their 50th wedding anniversary.”
“I see. Happy anniversary, although I would have liked to see them.”
“They’ll be back. Love never loses its way home. In the meantime, we have enough hibiscus tea for the entire season, so I’ll bring you one right away. With or without ice?”
“Without, thank you.”
Lucio walked away feeling strange inside.
Viola kept thinking that she still had to make her request to him.
“Here’s your hibiscus tea, full of its aroma and taste.”
“Thank you.”
“Is there anything else I can do for you?”
“Yes, you can do something for me. My name is Viola.”
“Nice to meet you, I’m Lucio. I’m all ears, Viola.”

Lucio sat down in the wooden chair, anxious to hear what this unusual blonde, freckly woman had to tell him.
Viola was happy to be able to talk to him about it. She felt reassured by this grizzled man, whose skin was tanned by the sun and marked by the salty sea air, with a hint of a belly and large, strong hands.
“I would like to book a romantic dinner. The one under the African gazebo, on the seashore, at sunset, with that fantastic menu that I once read. I’ve never had a romantic dinner. You still do organise them, don’t you?”
“Of course. Just let me know when.” Lucio was not happy to find out that Viola was involved with someone, but he didn’t show it.
“June 21st, for the solstice if possible. From sunset on. And I need it to be as intimate and reserved as possible.”
“My staff and I are the only ones here at night. It’s one of the features of this place. The owners left everything in my hands because I’m like family to them and they trust that I will scrupulously respect their values and choices.”
“Ok, thank you. I’ll see you on the 21st. As for the menu, it has to be fish-based and I’ll leave the rest up to you.”
“Thank you for your trust. Before you leave, I suggest you go for a dip in the private pool. It’s filled with sea water and it’s already warm. A nice hydro massage will help you sleep better tonight.”
Viola felt a shiver.
So did Lucio.

Viola was a marine biologist with love emanating out of every pore. Her fiancé broke up with her exactly one year before, the night before their wedding. He just suddenly realized that he didn’t want to share that kind of life with her. The seaside in the wintertime made him feel down. And even all those sick animals, she surrounded herself with made him sad. He was a writer and the whole world was bound to find out soon. But, if he had stayed in that forgotten little town in Versilia, among those few souls, nobody would have ever noticed him. His way out was moving to Florence, where he could make himself known and could find a way to get someone to help him.
Lucio got to the point of preferring places to people. He had left Florence because he didn’t like living the life of a manager anymore. He had asked his wife, a very well known journalist in the city, to accompany him on this summer adventure while he managed the Bagno Malù, one of the nicest five-star resorts of Versilia. The finest, in his opinion, with all its memorable colours and aromas that body and mind keep absorbing for a lifetime. But she didn’t want to have anything to do with leaving the salons in Florence. They were still married, but friends in common said she was seeing a younger small-town man who was using her to publish a book.

That 21st of July was perfect. The clear sky acted as a beautiful background to the relaxing coastline of Livorno, on one side, and the lovely coves of the Cinque Terre on the other; and in the middle, the red sunset, that crisscrossed the day’s passionate fire with the night’s cool tenderness. All was ready on the shore. Lucio had decided not to serve her table. He had no desire to watch Viola celebrate a romantic anniversary with her partner. That woman, slightly younger than him with her blond braid, her freckles, her strong yet minute body, her deep green eyes and her intriguing smile full of secrets had struck him. But he didn’t want to feel such emotions. It was useless. He stayed put in the kitchen to help the chef prepare dinner.

Had he come out, he would have seen Viola get out of a jeep, dressed like a young explorer, all alone. He would have seen her drag a large wooden crate behind her, full of slits, mounted on a trolley to help her transport it easily on the walkway that leads to the beach.
Lucio was hidden away in the kitchen, head down, concentrated on the food so as to keep his heart locked up in its cage.
“What an odd woman. She came all alone.”
He briskly lifted his head up and looked at the waiter in the eyes.
“Alone? Are you sure? And she isn’t waiting for anybody to come?”
“I don’t think so. She already had prawn tempura and fish crudités and already had two glasses of champagne. But what’s even more strange is that she put a large wooden crate next to the empty chair and from time to time she slides pieces of fish into it….”
“I’ll serve the scampi ravioli.”
Lucio served her the main course. Not a word spoken. And then he served her the second course; a marvelous platter of Red Prawns alla Catalana, a work of art based on fruit, vegetables and shellfish.
“Would you like to join me for a glass of wine? It’s a shame not to share such a good white wine with someone.”
“You are right, a wine called Virgola calls for a word next to it.”
Lucio sat down, ate and drank with her in this beautiful setting lit with candles and lanterns.
Viola was happy, but she still had to bring her mission of love to its end.
Noises came from the crate which somehow shook back and forth! Lucio observed it in a curious, yet also nervous, manner.
“Your partner misbehaved to the point of deserving this?” he joked.
“He behaved so badly that he doesn’t even deserve being here closed up in that crate.” They both laughed. Nighttime had definitely taken over the longest day of the year. The stars sang and twinkled in bright harmony. Once they finished the creamy-hearted chocolate cake, Lucio and Viola toasted with a glass of Zibibbo wine.
“And now,” she said standing up.
“Do you have to leave?” he asked following close behind her.
“Not me.”
Viola dragged the crate right up to the water, as the waves, welcoming and warm, calmly swayed in and out. She took off her shoes, as did Lucio, released a latch and waited for the door to open. In these few seconds, which seemed like forever, the wait turned into strong emotions.
First, a large scaly flipper stuck out, then the other one, followed by its big head at the end of its funny stretched out neck. Finally, the majestic carapace dragged out the rest of her body.
Viola knelt down next to the turtle, she pet it and whispered to it, “Go, sweetheart. I know you’ve been worrying yourself sick over brooding your eggs on the same beach where you were born. There are many dangers in the sea, but nothing is worse than dying of homesickness. Go back to your origins and give your little ones the gift of life. I love you all, to the moon and back.”
The large turtle stretched out its neck even more, as if she understood and appreciated this gesture of love. She quickly reached the water and dipped herself into the wave, as light as a cloud in the sky.
Viola walked back towards Lucio and held his hand, as he opened his heart wide to her. They watched the turtle disappear into the darkness of the sea leaving a bright sparkly trail behind it; maybe it was plankton or the reflection of the stars or just magic.
Because love never loses its way home.
Always. 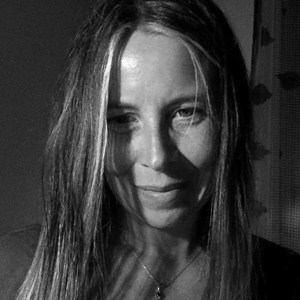